Bringing Quality Products to Our Customers Since 1980 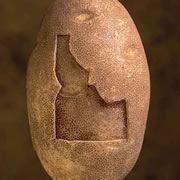 “Idaho® potato” and the “Grown in Idaho®” seal are federally registered Certification Marks that belong to the Idaho Potato Commission (IPC). These Marks ensure that consumers are purchasing potatoes that have been grown in the state of Idaho.

The IPC works hard to protect these trademarks and ultimately the integrity of the ‘”Idaho® potato” brand, which is recognized around the world as a premium potato. In fact, recently a trial was held in the U. S. District Court for the Southern District of New York where a jury  concluded, and a Judge affirmed, that “Idaho” was not generic for any russet potato.

While the russet is the most well-known potato grown in Idaho, more than 25 other potato varieties are grown in Idaho including:  Yukon Golds, Reds and Fingerlings.

* Disclaimer: The content above is from idahopotato.com – the official home of the Idaho Potato

What is an Idaho Potato?